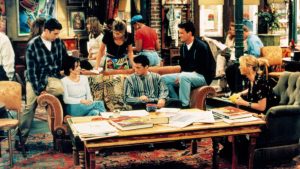 Daniel Packer, a 29-year-old data analyst at an online advertising agency in Los Angeles, knows more responsibilities will stack up as he hits the big 3-0 this summer, so he’s been religiously stashing away money in his retirement accounts the last few years.

Retirement is a long ways away for him, he says — at least 30 years — but saving money early on means not worrying about putting away as much later down the road if he weren’t able to do so. He’s already seeing his strategy pay off, given he has a 1-year-old daughter and raising kids is expensive (try somewhere between $284,000 and $600,000). “I’m glad I was able to take advantage of [saving] for the last nine years,” he said.

Thirtieth birthdays are an excellent time to take stock of your future funds, especially as short-term financial obligations solidify, such as continuing to pay off the last of student loans, living on your own (or maybe starting a potentially three-decade stretch of mortgage payments) and raising children. Millennials, the generation 20s to mid-30-year-olds fit into, have delayed marriage and home ownership from happening in their 20s (as was the norm decades ago). Now 57% of today’s 30- year-olds are or have been married, 47% are living with a child and a third are homeowners, according to the United States Census Bureau.

By 30, you should have a decent chunk of change saved for your future self, experts say — in fact, ideally your account would look like a year’s worth of salary, according to Boston-based investment firm Fidelity Investments, so if you make $50,000 a year, you’d have $50,000 saved already. By 35, you should have twice your salary, the firm said. The median retirement savings for a worker in their 30s was $45,000, according to Transamerica Center for Retirement Studies, which looked at workers’ retirement accounts including employer-sponsored accounts and individual retirement accounts.

The problem? Not everyone is saving — or can save — that much toward retirement. Either they’re living paycheck to paycheck, don’t know about the accounts available to them or simply aren’t thinking about the amount of money they’ll need in their futures. Only a third of Americans are saving money in an employer-sponsored or tax-deferred retirement account, according to the U.S. Census Bureau.

Today’s 30 year olds (and the soon-to-be 30 year olds) are plagued with crippling student debt, which just hit a record $1.31 trillion and affects millennials more than any generation before them. On top of that, some millennials are skipping starter homes altogether for a bigger home and, as nice as that is, home prices are rising as are mortgage rates. Some may also be splurging for a wedding — scary fact: the average American wedding costs about $35,000. The last thing someone in their 30s should do, though, is leave retirement to the wayside.

“It’s important to be saving for retirement while doing all these things at the same time,” said Alexander Rupert, assistant portfolio manager at Laurel Tree Advisors in Cleveland, Ohio. Retirement savings should be growth-oriented for someone in their 30s, he said, which means they should be stashing money away whatever they can and considering a high risk tolerance. Market ups and downs will affect the portfolio, but young investors should remember their money (and they) are in it for the long haul, Rupert said. 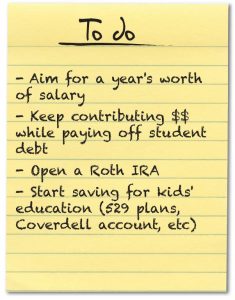 And if you’re not investing in an employer-sponsored account (after all, only 14% of employers offer such plans, according to the U.S. Census Bureau) consider a Roth IRA, which more forgivingly allows investors to use those assets for an emergency should a situation arise. As opposed to other accounts, like a 401(k) plan, that place penalties on individuals who withdraw money from these accounts, investors can take money out of a Roth IRA penalty-free so long as they only take out the money they invested, and not the investment earnings of those assets. Some 30 year olds, like Packer, have numerous accounts. Packer and his wife, for instance, have been maxing out their 401(k) plans and Roth IRAs for a few years.

“It will take a load off my shoulders later,” Packer said. “Setting ourselves up now will pay benefits in the future.”

Wondering what your savings should look like during a major money milestone? Send your questions to personal finance reporter Alessandra Malito.